Half of A Yellow Sun 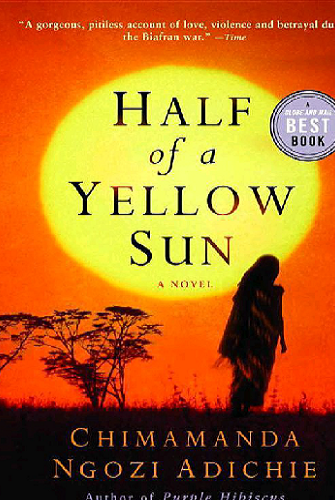 With her award-winning debut novel, Purple Hibiscus, Chimamanda Ngozi Adichie was heralded by the Washington Post Book World as the “21st century daughter” of Chinua Achebe. Now, in her masterly, haunting new novel, she recreates a seminal moment in modern African history: Biafra’s impassioned struggle to establish an independent republic in Nigeria during the 1960s.

With the effortless grace of a natural storyteller, Adichie weaves together the lives of five characters caught up in the extraordinary tumult of the decade. Fifteen-year-old Ugwu is houseboy to Odenigbo, a university professor who sends him to school, and in whose living room Ugwu hears voices full of revolutionary zeal. Odenigbo’s beautiful mistress, Olanna, a sociology teacher, is running away from her parents’ world of wealth and excess; Kainene, her urbane twin, is taking over their father’s business; and Kainene’s English lover, Richard, forms a bridge between their two worlds. As we follow these intertwined lives through a military coup, the Biafran secession and the subsequent war, Adichie brilliantly evokes the promise, and intimately, the devastating disappointments that marked this time and place.
Epic, ambitious and triumphantly realized, Half of a Yellow Sun is a more powerful, dramatic and intensely emotional picture of modern Africa than any we have had before.

There are no reviews yet.

Be the first to review “Half of A Yellow Sun” Click here to cancel reply.